Poisoning sushi in Kiev: the victims liked the taste, and now they are preparing lawsuits 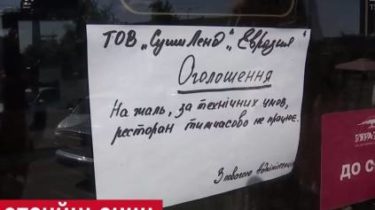 In the capital, 24 people were poisoned after one of the Japanese restaurants we ate sushi. The condition of the victims of average weight, threat of life, according to a story TSN.19:30.

People got into infectious Department with the same symptoms: pale skin, nausea, lethargy, and fever up to 40 degrees. “The taste was OK, we thought, Oh, what delicious sushi. It was an action, that is, we ordered and received two times more”, – told the victim Kristina Guseva.

Video settings Kyiv, 24 people were poisoned after eating sushi at one of the restaurants of Japanese cuisine

The girl tells that sushi with a friend, bought the restaurant and carried home. Damaged on the way food could not, because after 10 minutes the rolls ate together with friends. All of them after a while felt a sharp pain in the abdomen and the temperature steadily rose. When it was almost under 40, called an ambulance. In the hospital of 10 people there were four, the others are treated at home. “I don’t know to what state it was necessary to bring these products to give people to people so massively poisoned! Condition is terrible, terrible feeling. Finally wanted to feel summer – and ended up here,” he told the injured girl.

The diagnosis of “acute intestinal infection” doctors found 24 in Kiev. The restaurant itself is closed, on doors the announcement that it happened for technical reasons – not a word about the poisoning there. Derepressible already revealed numerous sanitary violations, took microbiological samples and handed them over to the lab. For the week promise to get results and to determine what exactly caused the poisoning. Now it is known that the employees of the institution were not sanitary books, also in the room was disturbed temperature conditions of storage products. “The violation of technological process, the preparation conditions, conditions of storage, transportation. Refrigeration equipment, which was supposed to be 6 degrees, little 15,” – said the head of the main Department of Derepressible of Ukraine Oleg Ruban.