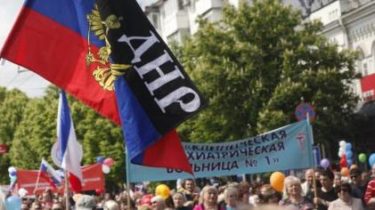 The so-called “Ministry of education and science of DPR” intends, from July to send in an indefinite leave teaching staff “of the Donbas national Academy of architecture and construction DNR” in Makeyevka.

This was written by the coordinator of group “Information resistance”, MP Dmitry Tymchuk in his Facebook.

In 2018, Russia may begin a full-scale offensive in the Luhansk region – Tymchuk

“These unplanned events will begin after the end of the current academic session, which is on schedule to be completed by the end of June. These actions are caused by insufficient funding of the institution from the “DNR” and the presence of arrears of wages to all employees of the Academy. Extremely resentful of such measures faculty plans to hold a protest and to make a collective complaint to the management “DNR”, – is spoken in the message.

It is also noted that the Universities that are on the territory controlled by the so-called “DNR” began opening campaign in 2017 which will last until July 31.

“The total number of universities participating in the campaign – 18. At the same time, submission of documents to institutions that require additional contests will occur until 11.07 (some up to 19.07). Institutions of secondary vocational education carry out a campaign with 1.07 to 15.08. In the framework of the “Humanitarian program of the reunification of the peoples of Donbass” announced that applicants from Ukraine-controlled part of Donetsk region can carry out a preliminary filing of copies of documents for admission to study in institutions “DNR” in their electronic mailboxes”, – Tymchuk added.

It is reported that “the Ministry of education and science DND” discussed the low number of students in educational institutions “DNR”, and a possible reduction in this regard, the teaching staff – the final decision will be taken after introductory campaign.

We will remind, on June 29 in Ukraine has opened registration offices in the electronic filing of documents for admission to universities.