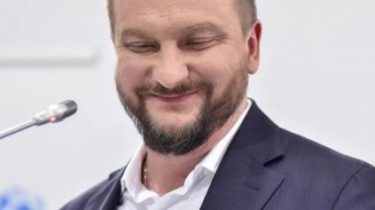 Autumn Ukraine will try to arrest the assets of “Gazprom” abroad, including in EU countries. The Russian monopoly should Ukraine $ 6 billion (antitrust fines and litigation in the Stockholm arbitration on the contract) and does not want to give them.

The Minister of justice Pavel Petrenko said in an interview with “Obozrevatel”.

“In the autumn we will move in the direction of application of mechanisms of legal assistance in the execution of court decisions in other countries. Still not going to name those countries to which we can turn, to avoid political manipulation on the part of the Russian Federation. It is not only the European countries. We have 27 treaties on legal assistance, which provide that decisions in economic matters can be made according to the principle of reciprocity to third countries. Will attract international consultants to the process. We are talking about quite a serious amount of money owed to Gazprom Ukraine. It’s almost $ 6 billion. Therefore, we apply the best legal mechanisms, the best experts for the implementation of this decision”, – said Petrenko.

It is also about the recovery of a fine, which “Gazprom” imposed by the Antimonopoly Committee of Ukraine. Along with penalties, it is of 171.93 billion. Managed to collect UAH 80.8 million.

“The decision of the Ukrainian court to recover the fines that passed all the courts, is on performance in the Ministry of justice. During those few months we managed to recover about 80 million and to seize shares worth up to 33 million Now, according to the law, we must check all possible assets, which are on the territory of Ukraine. For example, assets that are jointly owned with third parties. Using the query state performers examine all possible assets that may own “Gazprom” in Ukraine. Don’t want to predict but it is likely that such large amounts will not. We understand that the main assets of Gazprom are either in Russia or in other countries. Unfortunately, not in Ukraine”, – said the Minister.

In the world there are similar precedents regarding the arrest of property of foreign companies. However, the question of “Gazprom” is very sensitive, at least for the European countries that buy gas from him.

Gazprom is a public company, which must operate in accordance with international law and national legislation of the countries where it conducts its business. We demand only the enforcement of the judgment, which concerns the abuse of a monopoly position. I want to say that the European Commission against “Gazprom” has repeatedly conducted investigations of abuse of the company in Europe. Therefore, there is no policy. It is exclusively the law”, – said Petrenko.

Recall that in January 2016 the Antimonopoly Committee of Ukraine fined PJSC “Gazprom” to 85,9 billion UAH for abuse of dominant position in the market of transit of natural gas to Ukraine. Then this decision was confirmed several times by the Ukrainian courts. Once again 22 February the Kyiv appeal commercial court upheld the lower court’s decision to confirm the penalties from “Gazprom” of a fine, which has grown to 171,932 billion hryvnias at the expense of penalties for his failure to pay.

Later the Economic court of Kiev under the claim of the State Executive service of Ukraine decided to collect 79,877 million hryvnias of dividends of CJSC “Gaztranzit” (partly owned by Russian Gazprom) in the framework of the enforcement of PJSC “Gazprom” penalty of the Antimonopoly Committee of Ukraine.

It was also reported about the arrest of shares of “Gaztranzit”, belonging to “Gazprom”.

Meanwhile, the court has forbidden to charge “daughter” of “Gazprom” 80 million in favor of Ukraine. But Gazprom has terminated the agreement with its subsidiary company, the shares of which were arrested Ukraine.