Zakharchenko went on to rave about “the Ukraine”: Ukrainian troops want to switch to “our side” 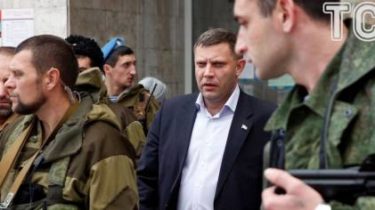 The leader of the militants “Donetsk national Republic” Alexander Zakharchenko has continued to develop their fantasies about “little” to “youth forum”.

“Gibilrossa” Putin”. Turchinov commented on the nonsense Zakharchenko on “state”

“This project (little Russia — ed.) is discussed at the level of political consultants, Federal experts. We have proposed a way out of the situation. This is a topic for discussion. We have already received millions of suggestions, remarks, was a lot of criticism,” — said Zakharchenko.

According to him, the criticism concerned the very name of the “new state” and location “of the capital”.

“Went to call and try to go to meet us and talk regular troops of Ukraine, they do not want to surrender and switch sides. It was a major victory. People who sit in the trenches, you begin to think,” — says Zakharchenko.

We will remind, on July 18, it was reported that the leader of the so-called “DNR” Alexander Zakharchenko said about the establishment of a “transitional state Malorossiya”. According to “Constitution of Ukraine”, the so-called “capital of the new state” should be Donetsk. According to the invaders, the creation of “a new state is intended “to stop the civil war and to avoid new victims”. The flag of the so-called “little” will be the banner of Bogdan Khmelnitsky.