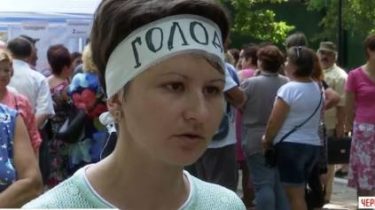 A mother of two preschoolers Lyudmila Fat went on a hunger protest – April, she doesn’t receive a salary. Works as an accountant in Osters’ke the city hospital in Chernihiv. When it began to engage the community, the salaries of doctors and staff have stopped paying at all. Huge sums owed for communal, energy already threatened to disconnect the hospital, and the staff does not believe the promises and dismissed.

Lyudmila Fat on hunger strike, because the spring on the payroll card received only one payment of 200 UAH.

“I already have a warning for power outages, debts for the garden. Can not draw any social assistance because I have this virtual salaries. I’m not eating, I only drink water,” says the woman.

10 physicians have already put the resignation letter in only one month. Wage arrears rose to 1.7 million. A few months without paying for water and electricity.

“I came yesterday to 8 numbers are supposed to turn off the electricity, and all… the Hospital ceases to exist completely. The anesthesiologist left, the nurse of medical, neurological, fled to work in Kiev”, – says Deputy chief doctor of the city hospital Osters’ke Anatoly Minchenko.

Lyudmila has supported the hospital in General. Because also do not get the money. The hospital receives a government subsidy, which covers slightly more than half of payroll. The rest, about 300 thousand hryvnia, should Finance the local community. Or to abandon the hospital. Local officials claim this exorbitant sum. My own get paid without delay.

Spacious chamber almost everywhere plastic Windows. In the surgical Department last year made the repairs. This winter, local officials have offered the case to close and not to heat. The hospital leaders have a different opinion – brick well maintained building to rent out and to earn money on heating and wages.

“Or run for some office, hospice. To use these hulls. because of the rot. Only did last year’s renovation”, – says Deputy chief doctor of the city hospital Osters’ke Anatoly Minchenko.

The district administration sees only one way out – to join Osters’ke to the district hospital. But after Lyudmila Fat on hunger strike, in the local budget still found some money and gave doctors a salary for half of may. Lyudmila temporarily stopped their action, but says if the rest of it in the near future will not pay to resume it again.