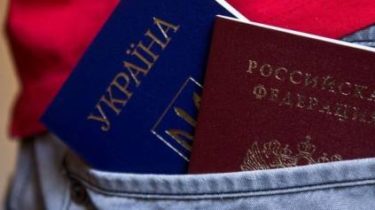 Since the beginning of the war on the front lines of the ATO for Ukraine is fighting a lot of citizens of the Russian Federation, but only two of them got Ukrainian citizenship. Most can’t collect the necessary documents, because they need to go to the Embassy, and in fact – to surrender of the aggressor, says the story TSN.19:30.

With the order for courage, but still without the certificate of the participant of hostilities. In 2014, the citizen of Russia Artem came as a volunteer in the “Right sector”, once caught in the sand – to protect the approaches to the Donetsk airport. “For the fight on December 18 in the area of Svetlodarsk arc” – says the Russian. He had to break through the checkpoints to the front, because men with a passport of the Russian Federation could hold the Ukrainian military. Artem was wounded in ATO, but returned to the front. “I’m forty times with life goodbye, lost health, didn’t hear anything practically with hearing problems. Imagine what is on the front lines around the clock – you bullets whistle, and you say that you can deport. Where? Clearly, I do not live there. SMS and from there send that to you Khan. And here is the indifference,” says a volunteer from Russia.

Videorussian fighting in the Donbas for Ukraine, are unable to obtain Ukrainian citizenship

From the beginning of the war Ukrainian citizenship had received four volunteers, 19 people gathered documents to get legal status, but they are wrapped. “In these 19 documents do not exist help from the Embassy of conviction,” – say the officials.

Certificate of good conduct – a requirement that terrifies foreigners, who defended Ukraine with the dream of our citizenship. “Samurai” is one of these, the 15 months he spent on the front lines. Now have to speak via an Internet connection, because hiding in the Czech Republic. To obtain a Ukrainian passport, the man failed to go voluntarily to the Russian Embassy for help, not risk. “In order for the new law to sign a contract with the Armed forces, I have to go to the Russian Embassy and get a certificate stating that I am not judged on the territory of the Russian Federation. Well, the company commander laughed, I stayed on the front lines as a volunteer,” said the man.