Russia has banned the movement of ships through the Kerch Strait 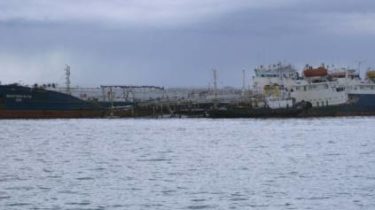 Russia has banned the movement of all ships in the Kerch Strait, with the exception of ships of the Naval Fleet of ships and the security of the Russian Federation.

The order was published on the website of the Russian administration of sea ports of the Black sea.

According to the document, so they want to ensure the safety of navigation during naval operations in the construction of the bridge, which will connect the occupied Crimea and the Russian Federation.

In the Kerch Strait while towing sank floating crane

“For the purpose of ensuring navigation safety when conducting marine operations in the construction of transport crossing through the Kerch Strait… ban from 06.00 to 18.00 local time on 9 August 2017 years of sailing all ships through the Strait of Kerch”, – stated in the order.

The only exceptions were the ships and vessels of the Navy of Russia and the Federal security agencies, as well as vehicles involved in the construction of the bridge to annexed Crimea.

Putin assured that the Kerch bridge will pass in time

Prohibited swimming area will act licensing the traffic and Parking in accordance with the daily schedule and placement of vessels in port of Kerch.

We will remind that the President of Russia Vladimir Putin said about the need to build a road and rail bridge across the Kerch Strait is March 19, 2014, immediately after the annexation of Crimea by Russia. The working traffic on the bridge is scheduled to open in December 2018, and finally to pass an object – in June 2019. The implementation of this project from the Russian budget will allocate 228,3 billion rubles.