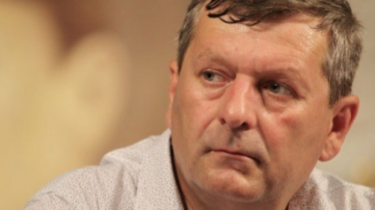 On 11 September the so-called “Supreme court” of the occupied Crimea will announce the verdict to one of the leaders of the Crimean Tatar national movement, Akhtem Chilgoza. Prosecutors require him to imprisonment for a term of eight years in a penal colony.

Occupants accuse chilgoza organizing mass riots during a rally in front of the Supreme Council of Crimea on 26 February 2014 in support of the territorial integrity of Ukraine.

9 Aug Chiygoza announced the last word before the verdict at the meeting of “court”.

The text leads the publication of the Crimea. Realities.

Before my mom’s death I asked her for forgiveness, as the son of the last heavy days could not be near her. Having collected last forces, she said, “I am proud that I raised such a son!”.

No matter what I do, or how I now may be hard, not knowing if it will work I do alive, I fear even more that my actions, thoughts, statements can embarrass me as a person, as Crimean Tatar, and my people will be ashamed for the trust and electing me to the Majlis of the Crimean Tatar people.

“Ant etkenmen, SEZ bergerman Millett icon ollege…” (a line from the anthem of the Crimean Tatar people, word for word: “I swore and gave my word to die for his people” – ed.). This oath I, like other members of the Majlis, said on bended knee and kissed the national flag in the courtyard of Khan’s Palace – the symbol of our nation, the centre of centuries-old statehood of the Crimean Tatars.

Several deportations – in fact, genocide was the desire of the Russian Empire and later the Soviet Union, to clear the Crimea of the Crimean Tatars and permanently destroy the history and memory of our people.

The people elect their leaders. Nothing can break the will of the people, nothing can destroy identity, love to the Motherland, to their land, passed down from generation to generation. For the Crimean Tatars, as for many other peoples, the concept of “civic duty”, “patriotism”, “national dignity” are special values.

26 Feb 2014 the Crimean Tatars and other citizens of Ukraine once again came out to protest against threats to the territorial integrity of Ukraine and demanding to hold accountable adventurers from the government and political rogues.

Later during the occupation of the Crimea, the Crimean Tatars together with other citizens of Ukraine, despite numerous provocations on the part of these forces, kidnappings, assassinations, raids, arrests, ban on commemorative funeral date, huge fines for the slightest sign of activity, despite application of a wide repressive practices have continued and continue to perform their civic duty.

These circumstances irritate these forces lead to anger and is forced to arrange a trial of innocent people.
More than two years of political process, which has already gone down in history as the “case on February 26”. Process, the purpose of which, of course, is to frighten the Crimean Tatars, to strangle and to minimize their activity to protect their rights, the support of Ukraine and the world community not to recognize the illegal annexation of Crimea.

For all it is obvious that any criminal case against Akhtem chigusa no. The incidents on 26 February 2014 at the peace rally announced by the Majlis of the Crimean Tatar people, was provoked by the individuals that contributed to the continued military occupation of Crimea. That is, do not judge those who betrayed him, who had goals and intentions aimed at changing the territorial integrity of Ukraine, who subsequently were kidnapped and killed people, illegally gave itself the authority to control, to judge. Judge those who defended the country’s laws, international norms, rules.

The Tribunal is satisfied with the country-invader, which has the rights for this.

In such a situation, knowing all the true intentions of the customers of this process, neither of which the objectivity and independence of the court is not necessary to speak.

I’m going to accept this verdict as the verdict for the whole of the Crimean Tatar people, on behalf of the Russian Federation, occupied my Homeland.

We will remind, Russian investigators seized the Deputy Chairman of the Mejlis of the Crimean Tatars Akhmet Chiygoza 29 Jan 2015 “participation in mass riots” against the annexation of Crimea by Russia.

Videopoem years behind bars for the Crimean Tatar activist demands, the Russian Prosecutor

Video settings Crimea detained the pensioner, who came to court with the poster “Putin, our children are not terrorists”