Mining protests in Kiev and stopping the nuclear power plant crisis, uranium production could have bad consequences for Ukraine 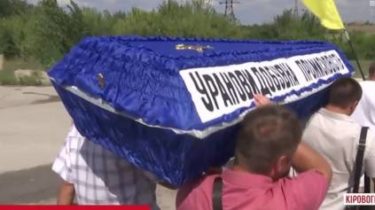 In Kirovograd uranium mines, the miners took to the streets, because almost three months they are out of work, since uranium production ceased. Authorization for use of deposits has ended and the new officials were not issued because the Commission lacks quorum, says the story TSN.19:30.

More than a thousand miners from the three uranium mines are carrying a symbolic coffin of the uranium mining industry. People are desperate, because the longer the mines stand idle, the harder it is to recover. To mine the miners come in every day, but the slaughter did not go down – production ceased in early summer. So now the workers only care that horizons is not flooded and worked all the utilities. Pay for it much less. “Four children, I need something to feed them. It is necessary to have the job. And we have no place to work – no us license gives, production no. No production – no money,” – explains his situation miner Valery Surface.

Permission for the development of uranium deposits the state enterprise received 20 years ago. Three of the Kirovograd uranium mines provide half of the needs of Ukrainian nuclear power plants. In the coming years, the miners were planning to go to 100% and then Ukraine’s energy independence would become a reality. But this summer, production had to stop because the time limit expired permit for mining development. All the documents needed for extension timely filed, but they are still not considered in Derzhavnaja. “It’s called sabotage. Nuclear power station from a lack of uranium fuel will be forced to reduce the capacity of their units, and perhaps some even stop, and then will be felt in our country, the shortage of electricity,” predicts the Chairman of trade Union Nikolay uranium mines Watermelon.

In the state service of Geology and mineral resources announced that the permit was not renewed because the Commission did not have quorum. Their indignation at the situation in the social network was expressed by the relevant Minister Ostap Semerak. “Once again disappointed the Commission meeting Geonet. Not got a quorum, and this is not the first time. The Ministry of environment has initiated changes in the composition of the Commission on issues of subsoil use under Derzhanija of Ukraine”, – he stressed. It is on the government’s last hope and the leadership of the mines. “To make the issue at a meeting of the Cabinet of Ministers on the work of the mines without a valid special permit until its renewal in the prescribed manner”, – formulates the expectations of the Director and Smolinskaya mines new Konstantinovsky, Vadim Kosarenko.