The shelling of the “Grad” and three wounded soldiers. A day in the area ATO 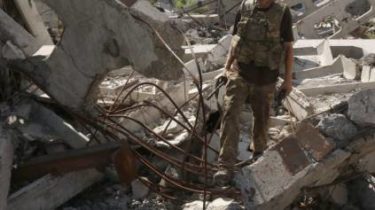 In the Donbas illegal armed forces 33 times violated the truce. The result of the fighting, two Ukrainian soldiers were wounded, one was wounded as a result of blasting on a mine.

#Topod the Construction of the press center of staff ATO in 15.08.2017. At the end of the last days the situation in the ATO area…

Posted by the Press center of the ATO headquarters on Tuesday, August 15, 2017

In the seaside area , the militants opened fire in the area Krasnogorovka. Around midnight, the Ukrainian military have Pavlopolya terrorists fired 4 shells from a portable rocket launcher “Grad” (the Guerrillas).

On Lugansk the direction fighters beat on the fortifications on the outskirts of the Crimean, Trinity, near Novoaleksandrovka and Novozvanovka.

In the direction of Donetsk continued shelling of Avdiivka industrial area.

Earlier in the headquarters of ATO stated that the confrontation with Avdiivka the industrial zone has moved to Mariupol direction.