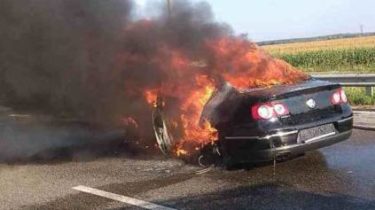 On the highway Kyiv-Chop near Kiev in the morning there was a terrible accident, which burned to death the driver of the Volkswagen Passat.

About it reported in a press-centre GU gschs of Ukraine in the Kiev region.

“On 18 August at 08:08, it was reported traffic accident on the highway Kyiv-Chop near the village of Sitniki”, – stated in the message.

As it turned out, the driver of the car Volkswagen Passat B6 at the speed he flew under the back of the truck Volvo 400, going ahead in the direction of Zhitomir.

According to eyewitnesses, the driver of the car tried to overtake a truck.

It is also noted that people were trying to get out of the car a man who lost consciousness due to shock, but he was trapped. After a few minutes, the Volkswagen caught fire and the driver burned to death.

Rescuers extinguished the fire and deblocked from cars is already a dead man, now law enforcement officers establish all the circumstances of the accident.

A terrible accident occurred this morning (around 07:55) in 40 kilometers from Kiev on the highway Kiev – Chop. The driver of the bus…

Recall, on the eve in Kiev on the bridge fire truck: fire barely broke through the deadlock. The owner of the car, according to witnesses, took the charred room and fled the scene. The cause of the fire machine is not installed, but in the trunk of a car found the gas installation.