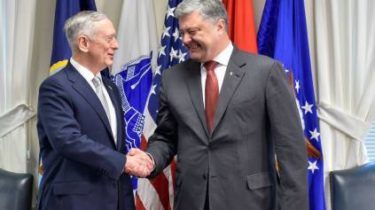 The US defence Secretary Jim Mattis will go on a business trip, to confirm a strategic partnership with the U.S. in the middle East and in Europe.

This is reported at the Pentagon.

August 24, he first will visit Kiev, where he will meet with defense Minister Stepan Poltorak and the President of Ukraine Petro Poroshenko. He needs to calm Ukrainian partners that the United States remain staunch supporters of the restoration of sovereignty and territorial integrity of Ukraine, as well as the strengthening of the strategic defense partnership between the two countries.

Advisor to the President of Ukraine Yury Biryukov in Facebook added that the celebration of the Independence Day of Ukraine will also visit the defense Ministers of Georgia, Lithuania, Latvia, Moldova, Poland, Montenegro, Estonia and the Deputy of defence of the United Kingdom.

Well, since the Pentagon said, and we. So – you of course remember the same “awful failure”, the visit of Petro…

Also for the first time he will visit Jordan and Turkey.

Recall that in early March the House of representatives supported the allocation of $ 150 million in military support to Ukraine. The funds will be available for the Pentagon to provide Ukraine with military support, including, in particular, the provision of lethal weapons of a defensive nature, and equipment, logistics support, intelligence support of the Ukrainian army and national security forces, the training of personnel of the Ukrainian armed forces and the like.