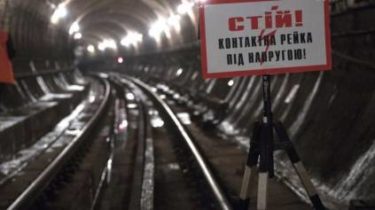 In the Metropolitan police detained the foreigner-digger: he entered the tunnel and could lead to a breakdown in the subway.

The incident occurred on the evening of 19 August, passed on the police website.

“The man jumped off the platform and went into the tunnel, but quickly was stopped by militiamen of the metro. In relation to men amounted to administrative Protocol. The incident occurred in the evening between the metro stations “Khreshchatyk” and “Maidan Nezalezhnosti”. The man, ignoring the rules of use and safe handling in the subway, entered the tunnel”, – stated in the message.

As it turned out, the tunnels explored a foreigner, born in 1990. The man explained that he had tried to penetrate in the underground structures of subway stations, because it is digger.

The foreigner was taken to the police Department in the subway of the Main Department of the National police in the city of Kiev to establish all the circumstances.

The sanction of article provides for a fine ranging from three to seven neobychajnyj minimum incomes of citizens or community service for a term of forty to sixty hours, or correctional labor for a term of one to two months with assignment of twenty percent of earnings, or administrative arrest for up to fifteen days.

We will remind, some days ago in Kiev at the metro station “Leo Tolstoy” a man fell under a train.