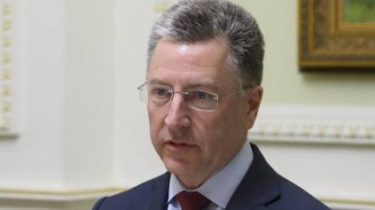 The Russian presidential aide Vladislav Surkov said that he agreed with the special representative of the USA in Ukraine with Kurt Volker to continue joint work in Ukraine.

About this polygamist RIA Novosti.

“Agreed to continue their joint work. Identified topics for the next meeting. Agreed that the peace process on the political track and in the field of security can and should go faster” – said Surkov at the end of the meeting.

Meanwhile TASS reports that Surkov expressed his satisfaction with the meeting with Volker.

“We agreed that the current situation in the South-East of Ukraine can not satisfy neither the conflicting parties nor the external forces contributing to the settlement. The discussion was conducted in a tone of mutual respect and interest, honestly, seriously, without illusions and bias. Commitment to the Minsk agreements under questioned: both parties propose new ideas and innovative approaches for their implementation”,- said Putin aide.

According to Radio Liberty, the meeting was held behind closed doors and lasted about three hours.

The US special envoy to Ukraine, Volker and assistant to Putin will meet behind closed doors to media

Recall that in the framework of the negotiations , the Special representative of the United States Ukraine Kurt Volker was supposed to visit Minsk, where he planned to meet with a representative of the government of Russia to discuss Russian-Ukrainian relations. It should happen on August 21.