A show or demonstration of the protection of the state. The opinions of Ukrainians regarding the military parade was divided 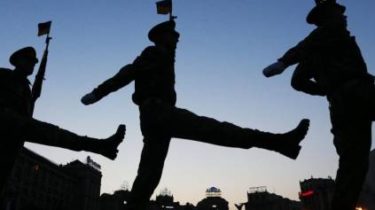 In social networks have a month of fierce debate raging about whether to hold the parade for the 26th anniversary of independence of Ukraine.

The volunteer Yury Kasyanov called the parade “the show”. However, he called for a March of veterans without invited guests and VIP-zones.

“I March for veterans. Let they will be marching columns without any officialdom, invited guests, private VIP areas, and other scoop. Let it be orchestra, a few tears of men, a sincere appreciation and respect of the people of Kiev”, – he wrote in Facebook.

I am against the parade. Against luxurious ostentation, jingoistic patriotism with flags, and embroidered. Against the howling…

The founder of Pizza Veterano Leonid ostal’tsi believes that such events are a demonstration not so much of force, and readiness to defend its borders and territorial integrity of the state.

The characters need to see the whole country, convinced the singer Maria Burmaka.

“I think this parade should definitely organize, it is very important, because it is not a military parade army, which did not smell of gunpowder, this is a real military generals, the soldiers who fought. We have his army and they need support,” – said the artist.

Maria Burmaka agrees and the Minister of culture Yevhen Nyshchuk.

“I learned especially last year, I can see what is the reaction of people at rehearsals, and I think that when we see those eyes, when will directly parade on the independence Day of Ukraine, I am convinced that it is necessary”, – he stressed.

We will remind, in Kiev from 22 to 28 August will be blocked off Central streets for the celebration of the Day of State flag and independence Day of Ukraine.