Four wounded soldiers. The situation in the Donbass 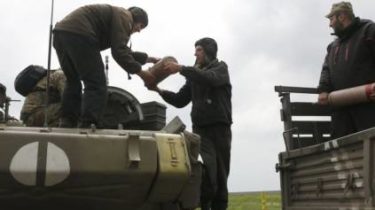 For the past day illegal armed groups 28 times violated the silence regime in Donbas. Three Ukrainian military were wounded, one received a combat trauma.

On the seaside direction , the militants were beaten twice from artillery caliber of 122 mm at strong points on the outskirts of Talakovka and Water. And about 20 hours, the terrorists released without aiming at least 6 shells of 152 mm caliber near the village of Water to an area where there are no Ukrainian positions. In addition, at the end of the day under mortar fire twice hit Ukrainian strongholds near Gnutovo and rocket-propelled grenades, the terrorists were beaten in the area of Pavlopol.

#Topod the Construction of the press center of staff ATO in 22.08.2017. In the area of the ATO at the end of the past day Russian-and…

Posted by the Press center of the ATO headquarters on Tuesday, August 22, 2017

In the direction of Donetsk , Avdiivka in the industrial zone from 19 o’clock until nearly midnight, the militants opened fire from 120-millimeter mortars, rocket-propelled grenades, heavy machine guns and small arms. The result of the confrontation, one soldier was injured. Also in the evening and night, the militants opened fire in Lugansk region, Troitsk, Russian Federation Butovka.

On Lugansk the direction terrorists from mortars and grenade launchers beat on strong points in the area of Novoaleksandrovka and Crimea. As a result of attacks, two Ukrainian soldiers got wounds.

We will remind that on 21 August during clashes at Avdeevka killed 28-year-old fighter 72 brigade Denis Glova. Denis is a native of the city of Fastiv, Kyiv region, he was the only son of his mother. The army was to mobilize, but then signed the contract. Bury fighter in his hometown.