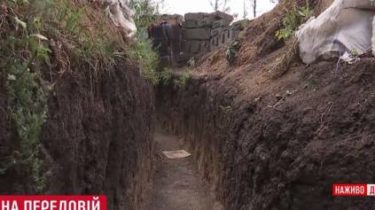 The militants do not adhere to announced a new truce in the Donbas. The enemy in the night time to provoke the Ukrainian soldiers to return fire, according to a story TSN.19:30.

The military said that the silence mode does not work, but the enemy is shooting at random with machine guns, grenade launchers, heavy machine guns and the like. Possible APU fighters are thus constrained – they are not allowed to respond to any provocation. Also, the military record the movement of equipment on the opposite side of the front, see tanks, but a heavy caliber the enemy is using – at least near Avdeevka.

But the enemy captured a different tack and sets fire to the position of the army special shells. Only last week, there were several attempts to destroy the foreign army in this way. “Lighting the night set fire to dry grass. Thanks to the wind blowing in our direction. Trying to smoke us,” he told call sign “Odessa”. So the Ukrainian military, despite the declared truce, are not able to relax.

As previously reported, over the past days in a zone of carrying out anti-terrorist operation any Ukrainian serviceman wasn’t lost, three got wounds. About this 26 August during a briefing said the speaker of the Ministry of defence on ATO Col. On Saturday, August 26, in the area of ATO in the Donbas during the second day of the so called “school” of the truce, the militants reduced the number of attacks to eight. They also used mortars and other heavy weapons.