Militants fired 10 times, and Poroshenko asked the OSCE to work around the clock. Chronicle of the ATO 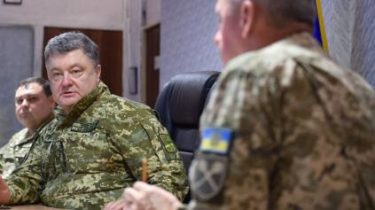 For Monday, August 28, in the area of ATO in the Donbas the militants ten times fired at positions of the Ukrainian military. In particular, twice opened fire from mortars caliber 82 millimeter.

“In Donetsk direction in the area of Avdeyevka industrial zone the enemy without aiming fired one mine 82 caliber. Also during the day in the industrial zone a few times worked enemy rocket-propelled grenades and heavy machine guns. In the coastal areas at night, the militants used mortar on the approaches to Krasnogorovka. In addition, under the attacks of bandits three times our strongholds on the outskirts of the Water,” reads the summary of the press center of staff ATO.

The Ukrainian military weapons are not used.

“For today the situation in the area ATO has not undergone significant changes. As for several days, after the beginning of the “school” ceasefire, illegal armed groups reduced the activity along the line of demarcation,” – says Ukrainian military.

Meanwhile, in the area of the ATO today visited the President of Ukraine Petro Poroshenko. There he, in particular, held meetings with the military. The head of state suggested that the OSCE inspectors around the clock to monitor the situation on the demarcation line – say, for the sake of a sustainable cease-fire.

“We are not satisfied, when the inspectors of the OSCE arrived at 9.00 and at 18.00, left, and shelled all night. That Ukraine put forward the initiative “school” truce – from 25 August to announce a firm ceasefire,” said Poroshenko.

He said that already third day the Ukrainian Armed forces are not combat losses and almost no attacks from heavy weapons.

Poroshenko expressed belief that with the support of partner countries and the actions of the Ukrainian authorities, Ukraine will be able to achieve peace in the Donbas.