Flowers, hugs, smiles in Kyiv gathered those, who survived the hell of the under Ilovaiskaya 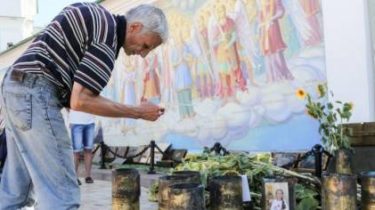 On the third anniversary of the tragedy near Ilovaysk on Mykhailivska square in Kyiv gathered the relatives of the dead and missing, as well as living witnesses of those events. Officially, as a result of the shooting of Russian troops in Ukrainian volunteers, who came out of the environment with special green corridor, killing 366 of the military, says the story TSN.16:45.

The fighter with the call sign “tar” is still on the front. “Mission not accomplished. If someone thinks that I went, got shot, walked away – I don’t think so,” he says. In the battalion “Donbass” he is with fellow liberated Popasna, Ukraine, and then came in Ilovaisk, where several wounds and was in captivity from which he was released “Red Cross”.

His sister Gnom held in captivity for almost a month, and considers himself lucky, because the invaders saw in the hands of a football fan tattoo with the inscription “Donetsk” and “miner”, so the soldier managed to avoid the bullying. “I’m particularly lucky, really. But this rinsing of brains: you and her… And we are on our land!” – the military says.

Both the soldier recognized that even three years after the tragedy a lot for them remains unclear. In particular, the real number of casualties – the boys are convinced that she at times exceeds official data. “Only 400 people we saw in Chervonosilka, so this is our column and our column was less,” – says “Gnome”. Ilovaisky boiler guys remember the lack of water and medicine, as well as fear for the brethren. “What struck me was how behaved girls in Ilovaisk. Many men had to take an example. Seriously worried about the girls to in captivity with them there…” – says “Gnome”.