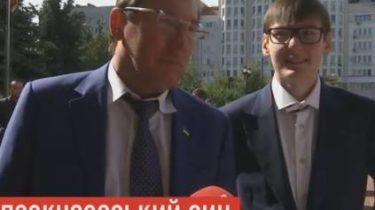 On the first call to the Institute of international relations of national Taras Shevchenko University Prosecutor’s family Lutsenko came without mom Irina – the representative of the President in Parliament. There was only the father and sons, Vitaly and Alexander, says TSN.12.00.

In General, students of the institutes of traditional tube of the machines at my University is not established, though it came to expensive cars. First-year students, unlike other students, priggery with parents, festively dressed and took many pictures.

In an exclusive interview with TSN Vitaly Lutsenko admitted that the son spent a year preparing for the EIT with Tutors, but was able to act only on the contract form of education, and that 46 thousand hryvnia per year.

“I think our family can afford the contract. I think better to let the children from poor families will receive a budget place, I think that’s fair. Someone in the family must have yuredicheskoe education,” – said the Prosecutor.

“This is a Ukrainian University, I didn’t want to go to study abroad,” said the younger Lutsenko.

Videosin Lutsenko admitted that he could only apply for contract form of education, KNU Shevchenko