Fire accident in Kiev: the half-dead driver crawled out of the burning car 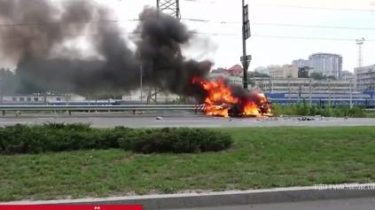 On Saperno-Slobodskaya street a car at high speed rammed the pole. Before the car touched a Japanese car, lost control and the leftmost row flew into a street lamp, standing on the side of right, says the story TSN.19:30.

The impact force of the car on the pole was so strong that the car literally clocked around the support. Witnesses say that immediately after the collision, the car broke first ignited something inside, and then the flames engulfed the entire car.

Video settings Kiev, a man escaped from a burning car, which was in a terrible accident

It was at this point out of the fiery cab alone climbed out the driver. He subsequently lost consciousness and was taken to a nearby hospital. According to preliminary information, he was sober, why didn’t cope with the wheel – will show a consequence. “There was a fire in the car, which went on the rear of the car, then the gas tank exploded. The driver was in the car alone, he climbed through the back window and was hospitalized,” – said the Lieutenant of police Alexander Pavlyuk.

Yesterday in the capital has been another terrible accident. In Kiev the driver of Daewoo Lanos at great speed crashed into a truck and was killed in a collision with a passenger car.