North Korea, Russia and ISIS on the same level. Turchinov commented on the loud threats Putin 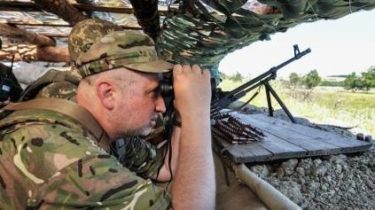 Russian President Vladimir Putin issued a statement about the possible “impacts in other zones of conflict” threatened that will supply weapons to global terrorist organizations and North Korea. This opinion was expressed by the Secretary of the national security Council and defense Oleksandr Turchynov.

In his view, the hysterical comments of Putin on the inadmissibility of the possible supply of U.S. lethal weapons Ukraine indicate Russia’s willingness to continue funding and providing arms the world’s terrorists.

“Loose is not a joke”. In Ukraine reacted to the loud threats of Putin

“The Russian President allow himself to scare the U.S. and the international community that Russian troops in the occupied territory of Donbass allegedly left the “enough weapons”, which can refer to any hotspot in the world, “sensitive to those who create problems for them” – that is, the United States” – quoted Turchynov press service of the NSDC.

Also, the security official stressed that in the occupied Donbas has never been a base for storage of military equipment and weapons, and delivers it to the territory of the Russian Federation only.

“All military equipment, ammunition and weapons are supplied by hybrid armies and terrorist groups “Luganda” exclusively Russian Federation. That is why the supply of weapons and equipment that are threatened by Putin, the US can only be Russian,” – said Turchinov.

According to him, Putin is not so much “opponents”, which he can supply weapons.

“This global terrorist organizations, like “IIGL” and “al-Qaeda”, or the North Korean regime threatens global security with its nuclear missile weapons. And now wants to arm the Putin under the guise of self-created by the occupation regimes of the fake “republics”, – said Turchinov, adding that now they threaten the security in the world, as once again Putin said.

As previously reported, the President of Russia Vladimir Putin after a visit to China said that in the case of the supply of United States armaments to Ukraine at the Donbass can escalate hostilities and even to spread to other regions. He also stressed that is willing to accept the presence of UN peacekeepers in the Donbass, if they will abandon their weapons.