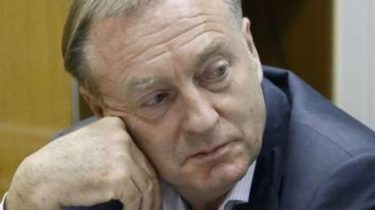 The ex-Minister of justice of times of presidency of Viktor Yanukovych Oleksandr Lavrynovych has assured that he knew that made him a suspect from a telephone conversation with the Prosecutor sostools during his vacation in the Carpathian mountains.

He told about it in exclusive interview to journalists of TSN.

“I called the Prosecutor and said that you feature suspicion. I said okay and he was ready to receive it. When to get specific. Not yet, I do not know what is written there. Well, this shows once again how the Prosecutor General’s office is working outside the law. It’s like a PR Agency, it’s Facebook message on the procedural action in the absence of the one against whom it is not permitted by the law of Ukraine. But the Prosecutor General’s office is not very concerned about,” – said Lavrynovych.

Ex-official does not exclude that in the document itself suspicions, will be described in another article, not the one that wrote Yuri Lutsenko.

“Incriminated article, which provides for the forcible change of the constitutional system. If it is a man during a rally, I would understand. But when it says the attorney General is bad enough for the state. Of course, when you do not have a text that there was a detective, a Prosecutor wrote, and only the words of the attorney General. And he still can’t handle legal terminology, so comment here should be very careful, because it can be written completely different,” – said the former Minister of justice.

He also suggests that this post from the attorney-General may be a PR stunt.

“We have the attorney General more is headed by a PR Agency than a Prosecutor, so it is such statements in Facebook and writes. Of course it’s PR, which is needed now to show the fight against the “criminal regime”, which has been successfully conducted, so that today’s “criminal regime” was able to carry out their actions in the collapse of the Ukrainian state,” – said Lavrynovych.

Recall that in the second case against Viktor Yanukovych appears the ex-Minister of justice Oleksandr Lavrynovych. They reported about suspicion in the seizure of power.

This was written by the Prosecutor General Yury Lutsenko in his Facebook. Yanukovych and Lavrynovych suspect in the constitutional coup of 2010 “by expanding the powers of the President of Ukraine at the expense of the shrinking role and powers of Parliament and government.” While Lutsenko did not exclude that in business can appear and the names of the judges of the constitutional court – it will depend on their testimony. This, according to the attorney General will go to court after a trial of treason.

Videomagazine case: GPU reported Yanukovych and Lavrynovych on suspicion in capture of the power