Poroshenko promised not to become a lawyer friends corrupt 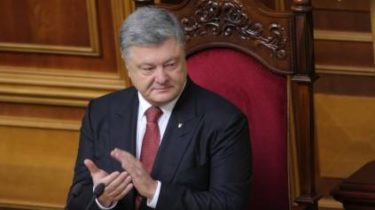 The President of Ukraine Petro Poroshenko on 7 September during the appeal to the Verkhovna Rada stated that none of the officials did not shy away from responsibility, if he is rightly accused of corruption.

According to the Ukrainian leader, now the most painful and the most difficult question in our country – corruption.

“In General, a fairly dense network built so that today none of the officials are not guarantees of impunity. No, no, you can never guarantee political roof or cover. Yes, I feel the question in the air. This fully applies to the so-called friends of the President. No one from my team in the case of objective claims from law enforcement agencies, a lawyer is not going to work. So there is no place in my team,” he concluded.

Recall, NATO Secretary General Jens Stoltenberg during a speech in the session hall of the Verkhovna Rada quoted a poem by Taras Shevchenko and said that NATO “do not care”, what will happen to Ukraine, but she needs to uproot his home “cancer” of corruption.