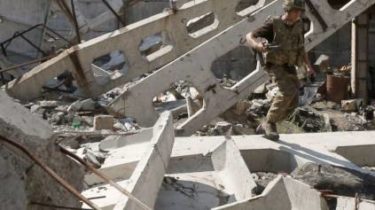 For the past day illegal armed groups in the Donbas 35 times opened fire on strong points of the Ukrainian army, all the shots were aimed. In the fighting 5 soldiers were injured.

In the evening gunmen opened fire on positions near Sands. In the nearly two-hour attack, the militants fired more than 20 min of various calibers. They also beat from grenade launchers, heavy machine guns and APCS. In addition, at the end of the day under granulometry fire was hit several times by strengthening in the industrial area of Avdeyevka and the mine Butovka. About 18 hours as a result of fire from APCS and anti-aircraft Ukrainian fortifications on the outskirts of Semigor wounded Ukrainian military.

#Topod the Construction of the press center of staff ATO in 8.09.2017. At the end of the last days the situation in the ATO area…

Posted by the Press center of the ATO headquarters on Friday, September 8, 2017

On the seaside direction militants used mortars caliber 82 millimeters near Marinka. Rocket-propelled grenades opened fire near Starognatovki. Small arms and heavy machine guns worked at strong points on the outskirts of Lebedinsky and Talakovki. About 22 hours as a result of fire from a grenade launcher positions of ATO forces near the Water, another Ukrainian soldier was wounded.

On Lugansk the direction the facts of the use of grenade launchers by militants near the Crimean recorded twice and once near the village of Lugansk, said the headquarters of ATO.

Recall, September 7, fighters of 25 times fired at positions of the Ukrainian military and killed a Ukrainian soldier.