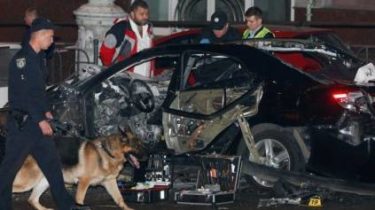 On preliminary conclusions of experts, capacity of an explosive device in the car of a Georgian citizen Makhauri, blown up September 8 in the center of Kiev, ranged from 600 to 1000 g in a trotyl equivalent.

This was announced by adviser to the Minister of internal Affairs of Ukraine Zoryan Shkiriak in Facebook.

According to him, practiced all possible versions of the incident. Among them premeditated murder, the attack the work of Russian secret services, gangsters, personal animosity or revenge, and so on.

Currently, the crime is being investigated under the article “Premeditated murder”, however militiamen do not exclude that it can be transferred to “Terrorist act”.

Shkiriak added that units of the national police and the National guard in Kiev was transferred to the strengthened mode of service.

Attention! Regarding yesterday’s resonant crimes on the Bessarabian square. On preliminary conclusions of experts, the power of…

“By the strengthened patrol of streets, places of a mass congestion of people, subway stations”, – wrote Advisor to the Minister in Facebook.

Videoexpert CSU continue to work on a place of explosion auto

Also as a result of the incident injured the woman and child. During the life of the first of these fighting doctors, she is in Kyiv hospital No. 17. The child was hospitalized in the “Hospital”. His life now threatens nothing.