Saakashvili changed the location of the press conference- media 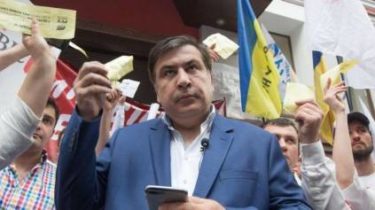 The ex-President of Georgia, former head of the Odessa regional state administration, Mikheil Saakashvili is in Rzeszow, where she plans to give a press conference.

In Rzeszow at 10 in the morning held a press conference with Saakashvili, not in Przemysl, as previously planned. About it reports “Ukrainian truth”.

In the Rzeszow has arrived the leader of “Batkivshchyna” Yulia Tymoshenko.

At the same time, “Gromadska” reports that Saakashvili’s team has announced a press conference in Przemysl, however, a few hours before the conference itself moved it over 50 kilometers to Rzeszow. According to the journalists of “Gromadsky”, the press conference will be held at 11 a.m. in Kiev.

Saakashvili wants to arrive in Ukraine at about 13:00.

We will remind, earlier journalists noted that Saakashvili will give a press-conference in Przemysl, where the bus with journalists will leave in Krakovets.

In anticipation of the arrival in Ukraine, ex-Chairman of the Odessa regional state administration and the former President of Georgia Mikheil Saakashvili, who was deprived of citizenship of Ukraine, at the checkpoint across the border “Krakovets” brought together hundreds of activists. The politician announced that will cross the Polish-Ukrainian border on Sunday, September 10.

Some of them had marched from Kiev. Law enforcement officers detained a convoy at night on 9 September on the territory of Kyiv region. “The Headquarters of the blockade” reported that the gunners were not allowed to get out of a car, allegedly illegally demanded to conduct a search of cars and people. Court orders the special forces was not, as noted by the activists. On the morning of 9 September, police in the Zhytomyr region for the second time detained a convoy, which is sent to the Krakovets ‘ to meet the former head of the Odessa regional state administration Mhala Saakashvili.