The militants have increased the number of attacks on the Ukrainian positions up to fifty times. Chronicle of the ATO 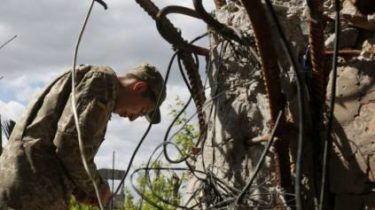 Sunday, September 10, in the area of ATO in the Donbas the militants have substantially increased the intensity and number of attacks on Ukrainian military positions to 51.

“At the end of the last days the number of attacks of positions of forces of anti-terrorist operation from the Russian-occupation groups have continued to increase. If before the enemy in most of the provocations used small arms and light weapons, in recent times we often fix the work of mortars of different calibers. Also increasing the activity of the enemy in the direction of Lugansk, who had been relatively quiet. In cases of direct threat of life of our military force ATO several times opened fire in response. Losses among the Ukrainian defenders there,” – said the press center of staff ATO.

Around 18:00 on Sunday the militants several times shot from grenade launchers and small arms on Ukrainian positions near Avdeevka, Maori, Verhnetoretskogo. From APCS – Zaytsevy in the area, Sands. And around 21:00 near Novoluganskogo during the shelling which lasted almost an hour, the militants, in addition to rocket-propelled grenades and small arms, used mortar shells 82 mm.

On the Mariupol direction in the area of Shirokino at the end of the day militants twice shelled the positions of Ukrainian army with mortars of various calibers. And under the fire of grenade launchers was strengthening near Talakivka, Lebedinsky, Pavlopol, Marinka.

On Lugansk the direction the evening and at night from grenade launchers twice beaten on the Crimean area, and the 82-millimetre mortar at Novotoshkovskoye.