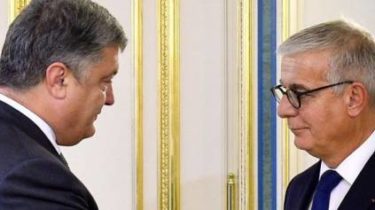 “As President, I appreciate the continued support for the territorial integrity and sovereignty of Ukraine, as well as a significant contribution hervé Moray in the development of Ukrainian-French inter-parliamentary cooperation”, – said the head Ukrainian state.

Poroshenko during a meeting with a delegation of French senators, in particular, discussed the situation in the Donbas and the Crimea. The senators expressed their intention to visit the ATO zone and to get acquainted with the situation in the region as a result of the war.

We will remind, in June the President of Ukraine Petro Poroshenko said the former Prime Minister of Arseniy Yatsenyuk with the order of Prince Yaroslav the Wise IV degree.

Awarded Senator of France, head of the friendship Group Ukraine-France hervé Sea, the Order “For merits of III degree”. I like Pres…