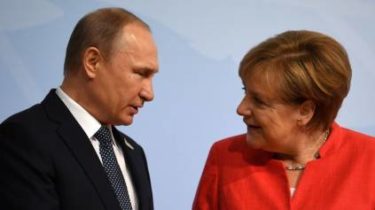 This reports the press service of Putin.

It is noted that during the conversation he discussed the Russian initiative on the establishment of the UN mission to promote the protection of the Special monitoring mission to Ukraine (OSCE SMM).

Given Merkel expressed the reasons he stated about the readiness to complement the role of peacekeepers, proposed in the Russian draft resolution of the UN security Council.

“I mean that ensuring the safety of OSCE observers by UN personnel can be carried out not only on the line of contact after reconstitution of forces and means of both parties, but in other places where the SMM, the OSCE carries out its inspection visits, in accordance with the Minsk package of measures,” – said the press service of Putin.

We will remind, Putin has declared, that supports introduction of UN peacekeepers to the occupied territory of Donbass, however, these forces should only be on the boundary line.