Saakashvili disappeared from the hotel in Lviv: the politician did not return for the night 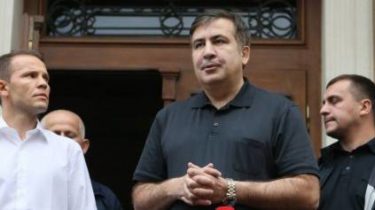 The leader of the “Movement of new forces,” Mikheil Saakashvili disappeared a few hours ago, the night he left in an unknown direction from the hotel in Lviv.

Saakashvili’s appeal against deprivation of nationality in court – lawyer

Another evening in the lobby, where Saakashvili had a Suite, it was very crowded: there were security guards of the former head of the Odessa regional state administration and his associates. Later they abruptly went outside, where she sat down in the van of the battalion “Donbass” and other cars and drove in the unknown direction.

A few guards Saakashvili remained inside and assured reporters that their boss was not going anywhere to go and spend the night in the room. However, subsequently, the Elevator suddenly came and Saakashvili himself and then walked out of the hotel. The guards said that the politician was away on business.

Despite the fact that after some time the van returned to the hotel, the delegation, headed by Saakashvili journalists saw. The staff also noted that the policy did not return.

Lawyer Saakshvili stated that she is not sure where his client, but suggested that he could go to Chernivtsi.

Lawyer Saakshvili stated that she is not sure where his client, but suggested that he could go to Chernivtsi. The law enforcement sources said TSNthat a politician of scope are not allowed.

Videoscale know, when will consider the case of illegal border crossing Saakashvili

Today, 13 September, the ex-President of Georgia promised to start their tour of Ukraine – the first city to be visited were selected Chernivtsi.