“Marshall plan for Ukraine”: Kubiv and Kubilius revealed at least some details 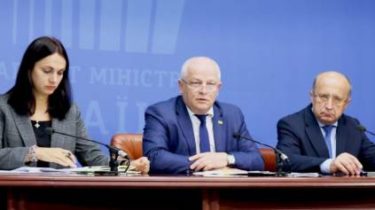 After Prime Minister Vladimir Groisman in the television broadcast indicated that a year and a half at his post, the government still has not announced at least some of the items so advertised “Marshall Plan for Ukraine“, today it finally happened.

A formal plan of economic development called “the New European investment plan for Ukraine and other Eastern partnership countries”. This is a joint Ukrainian-Lithuanian initiative, the press service of the Cabinet.

“The European Union and Western donors in the years 2014-2017, and helped us with funds for macroeconomic stabilization and helped to start rebuilding the economy. But remember how post-war Europe made an economic breakthrough. Where money was allocated for international support? “The Marshall plan” – a plan for investment in the real sector, infrastructure, agribusiness, credit instruments for small and medium business”, – said the first Vice-Prime Minister, Minister of economic development and trade Stepan Kubiv.

“We understand that in order to have keep the pace of reforms, it is necessary to maintain the motivation of the public and politicians. For Lithuania this motivation was the prospect of EU membership, which we suggested from the very beginning,” – said Kubilius.

He argues that the EU has done a lot for Ukraine: earned a visa-free regime and the Association Agreement, but now is the question, how will develop further Ukrainian-European relations. “The Marshall plan”, he said, is a tool that needs to demonstrate to the Ukrainian society the support of European partners.

“According to experts, EUR 5 billion of investment in the economy for a year will provide Ukraine economic growth of 6-8% per annum,” – said Kubilius.

These figures laid down in the “Marshall Plan for Ukraine”. Stepan Kubiv noted that the priority will be infrastructure projects, areas of energy efficiency, the digital economy through the prism of small business.

MP Hanna hopko said that a working group consisting of representatives of the government and Parliament. The task of the working group together with the Lithuanian side – until 25 September to work out concrete steps and activities of the investment plan (must be defined five main priorities), which will be presented at the Eastern partnership Summit in November 2017. A donor conference to Finance a “Marshall Plan” I want to be held in February-March of 2018.

We will remind, “the Marshall Plan for Ukraine” is an initiative of the Republic of Lithuania to help Ukraine in 2017-2020 years, provides, inter alia, the economic, financial and investment support, including the strengthening of the strategic dialogue Ukraine – the countries of the West to ensure Ukraine’s European integration. Initiative “Marshall Plan for Ukraine” envisages investment in the real sector of Ukraine’s economy and support of reforms aimed at economic growth, creation of new instruments for financing investments and support small and medium-sized businesses.

Earlier in Lithuania said on the financial support of the project “Marshall Plan for Ukraine”.