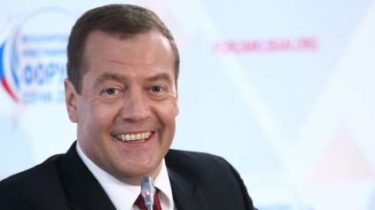 Because of Medvedev’s visit to occupied Crimea, the Ukrainian foreign Ministry sent a note of protest to Russia

“The fact that anti-corruption investigations of the Bulk of Medvedev, it follows that he probably did not steal anything. Anyway, by the standards of the Russian ruling elite. He had not detected any oil company, no gold mines, no ports, no spaceports. He only has a few houses, and each of them inferior to the traditional luxury of the residence of the oligarch in Russia or abroad. In addition, the Medvedev – Putin political son. In this sense, a certain amount of trust between them is maintained. After all, it was difficult to find someone who would have refused the presidency in favor of his political father. But Medvedev this person was, so his main problem is alcohol,” – said Belkovsky.