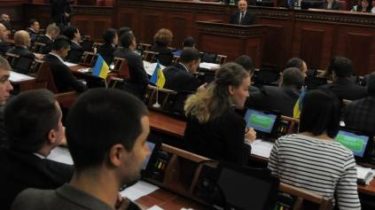 Kyiv city Council supported the idea of allocating land area of 1.22 hectares for the resettlement of the Museum of the revolution of Dignity. The decision was supported by 96 MPs, the official website of the city Council.

The Museum will be located in the Pechersk district of the capital in the alley of Heroes Heavenly Hundreds (ex Institutskaya street). “We have to remember the defenders of our country. Three years ago for our independence and democracy people have paid with their lives. So we must create a Museum of the revolution of Dignity, thus honoring the memory of heroes. Land at the Alley of Heroes Heavenly Hundreds, 3, meets all the requirements of the town planning logic and historical determinism,” – said the Deputy of the mayor — city Council Secretary Volodymyr Prokopiv.

As reported, this spring, the President Petro Poroshenko signed the law on allocation of land for the memorial-Museum complex of the Heavenly hundred Heroes. About it reported in a press-service of the head of state. “President Petro Poroshenko has signed the Law of Ukraine “On amendments to section V “Final provisions” Law of Ukraine “On regulation of urban development” on measures to ensure the honoring of the feat of participants of revolution of Dignity and perpetuating the memory of Heroes of Heavenly Hundred” No. 1854-VIII”, – stated in the message.