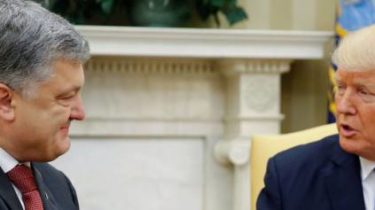 The President of Ukraine Petro Poroshenko next week to meet with U.S. President Donald trump.

The information spread by the media, was confirmed by press Secretary of Ukrainian President Svyatoslav Tsigalko.

“On Thursday, September 21, during participation in the 72nd session of the UN General Assembly

The President of Ukraine Petro Poroshenko will meet with US President Donald trump,” wrote he in Facebook.

On the meeting of the leaders of the two States announced in the White house. Advisor to the President of the United States Herbert McMaster during a briefing in new York said on September 21 Donald trump will meet with leaders of Turkey, Afghanistan and Ukraine.

“The last two countries in recent years came under attack on their sovereignty,” said McMaster.

We will remind, in June in Washington, the White house hosted a meeting of Ukrainian President Petro Poroshenko and his us counterpart Donald trump. Politicians met in the oval office. After that, Poroshenko left to journalists. According to him, they discussed the situation in the Donbas. The Ukrainian leader said that the US President advocated the expansion of cooperation between Ukraine and the EU.