In Kiev the car at high speed crashed into a truck: there are victims 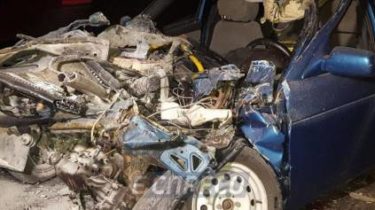 In Kiev, on the Ring road the driver of the car didn’t see the truck and crashed into her at high speed.

VAZ was moving along the Big Ring road from the Odessa area in the direction zhulyanskogo overpass, pass Vartovy.Espreso.

It is noted that, for unknown reasons, the driver of VAZ did not see the truck road service with appropriate signs, which workers were engaged in road marking. The driver at the last moment applied emergency braking, however it did not save from collision and Mercedes at high speed crashed into a trailer truck.

Blow was such force that the car turned into a pile of scrap metal.

The accident people in Weight was trapped deformed designs a car and had to call rescuers of gschs, but before their arrival, the road workers with indifferent drivers were able to free the driver and two passengers of a metal trap. Paramedics hospitalized three victims in serious condition.

At the scene worked, the police and investigatory-operative group.

We will remind, earlier in Kiev on karavaevy cottages occurred an accident involving a tow truck and a light car “Skoda”. According to the tow truck driver “Skoda” went to the red light, but the driver claims that violated the rules, the driver of the vehicles. After a collision on the hood of the car with a tow truck dropped a metal box weighing about 100 kg.