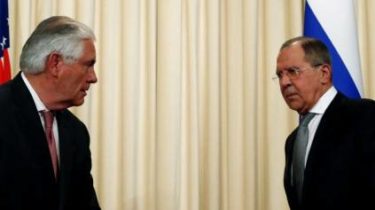 About it reports the Russian foreign Ministry in Facebook.

It is noted that during the conversation the officials discussed “the need to intensify efforts to implement the Minsk agreements on the settlement of the crisis in the South-East of Ukraine.”

In addition, Tillerson and Lavrov discussed “the current situation regarding the Syrian settlement, including the tasks of the antiterrorist struggle on the ground, the implementation of the decisions of the International meeting on Syria in Astana on 14-15 September and prepare for the next round of the political process in Geneva”.

It is reported that the conversation was initiated by the American side.

We will remind, earlier the President of Russia Vladimir Putin held a meeting with permanent members of the security Council of the Russian Federation, having discussed the agreement of the leaders of “Normandy format” (Ukraine, Russia, Germany and France) on the situation in the Donbas.