A full-fledged peacekeeping mission, Poroshenko said the details of the meeting with UN Secretary General 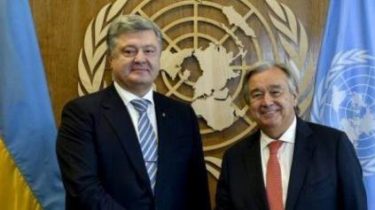 The sides thoroughly discussed the involvement of the UN in settling the situation in Donbas, in particular, prospects for full deployment of the UN peacekeeping mission in Ukraine.

The President of Ukraine is convinced that only a full-fledged peacekeeping mission with a comprehensive mandate to contribute to the achievement of the main goal – the restoration of peace in Donbas. The interlocutors stated that the mission’s deployment should occur with a clear respect for the basic peacekeeping principles UN.

“The President stressed the need for the international community to take additional measures to force Russia to fulfil the specified document. In particular, Russia should ensure safe and unimpeded access to the Peninsula’s existing regional and international monitoring organizations in the field of human rights”, – stated in the message.

The President of Ukraine thanked the UN for providing humanitarian assistance to internally displaced persons and affected civilian population of Donbass.

Poroshenko struck the support of Ukraine in the UN

The two sides also discussed issues of strengthening of personnel representation in the structures of the UN system.

During preliminary telephone conversations of the leaders of the “Norman format,” President of Ukraine Petro Poroshenko noted the necessity of introducing it in the Donbass.

Recall that meanwhile, Russian President Vladimir Putin has declared, that supports introduction of UN peacekeepers to the occupied territory of Donbass, however, these forces should only be on the boundary line.