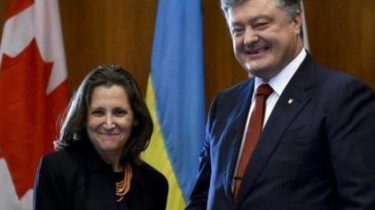 During a visit to Canada by the President of Ukraine Petro Poroshenko met with Minister of foreign Affairs Christ Freeland. The sides discussed issues of economic cooperation, as well as questions about the Donbass and sanctions pressure on Russia.

In particular, and discussed possible ways of mutually beneficial opportunities provided by a free trade Agreement (entered into force on 1 August this year), as well as further deepening of bilateral cooperation in the defense sector, including Ukraine’s support in the development of close partnership relations with NATO. About it reports a press-service of the President of Ukraine.

Elaborated on the issue of development of the situation in Donbas and the status of implementation of the Minsk agreements, coordinated approach to the implementation of the initiative to deploy the UN peacekeeping operation throughout the occupied territory of individual regions of Donetsk and Lugansk regions.

There was also the expectation that Canada will take a principled stand on the question of sanctions pressure on Moscow, especially in the context of the upcoming presidency in the “Big seven”.

Poroshenko noted Canada’s support for the implementation of reforms in Ukraine. In particular, he thanked Christ Freeland for his personal participation in the London conference on reforms in Ukraine in July this year, during which it was announced new canadian support projects.

We will remind, before Poroshenko met with the Prime Minister of Canada Justin Trudeau.