Poroshenko’s visit to Canada and the case of a fire in camp. Five things you might oversleep 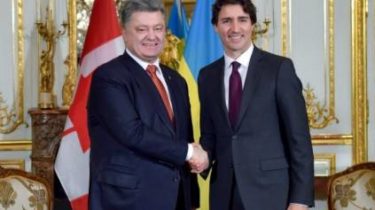 1. The Prime Minister of Canada Justin Trudeau commented on the issue of providing military assistance to Ukraine.”We will remain forever with Ukraine on the fight against the illegal aggression of Russia against Ukraine, and efforts by Russia to destabilize Ukraine. We struggle with this,” said canadian Prime Minister. Trudeau also reminded that Canada is helping the instructors that train the Ukrainian military and pass on to them your experience. Read more→

2. In recent years Ukraine has done a lot of work to reform. This was after a meeting with President of Ukraine Prime Minister of Canada Justin Trudeau. “In recent years in very difficult conditions, Ukraine has done a lot of work on reforms, took the difficult but necessary decisions, and showed economic growth, which should benefit its citizens. Canada remains very pleased with the progress of Ukraine. We will be there to support you in every way,” said Trudeau. Read more→

3. In the capital of the canadian province of Alberta, in Edmonton, will soon appear the Consulate General of Ukraine. About this by results of negotiations with the Prime Minister of Canada Justin Trudeau said the President of Ukraine Petro Poroshenko. “We discussed further strengthening of personal bonds between our people. In particular, we agreed to open the Consulate General of Ukraine in Edmonton because Alberta is home to 340 thousand Ukrainians. We want to do everything possible for rapprochement of our countries”, – said Poroshenko. Read more→

4. President Petro Poroshenko met with the Ukrainian community of Canada noted that during today’s talks the parties also discussed visa liberalization. “Because the sincerity of friendship between Ukraine and Canada, supported by deep historical roots and kinship ties. We did the canadian side of the specific sequence of actions for the positive promotion on the way. I am convinced that this will contribute not only to maintaining family contact and the expansion of Ukrainian-canadian economic and cultural cooperation”, – said Poroshenko. Read more→

5. To investigate the fire and the deaths of children in sports camp “Victoria” connected to the best employees of the main investigation Department of national police of Ukraine and investigators of Prosecutor’s office of Odessa region, with experience in fire investigations. Now, investigators have opened three criminal proceedings on signs of article 270 (violation established by the legislation of fire safety requirements), 366 (forgery) and 367 (office negligence) Criminal code of Ukraine. Read more→