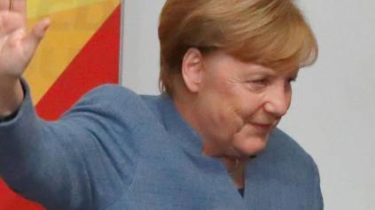 The President of Ukraine Petro Poroshenko congratulated kanzlers of Germany Angela Merkel on the victory of her party in the elections to the German Bundestag.

Videoscale known the preliminary results of the elections in Germany

“A clear credibility is a United and strong Europe! The victory brings the restoration of the territorial integrity of Ukraine and its future in the United Europe!”, – wrote the head of state on his page on Facebook.

Merkel remains in power. Who else will go to the Bundestag and how it will affect relations with Ukraine

“Mutually beneficial cooperation between our States will develop further!”, – said the head of the Ukrainian government.

Published by Poroshenko on 24 September 2017.

Recall, according to exit polls, the ruling conservative bloc CDM/CSU headed by German Chancellor Angela Merkel, won the election to the Bundestag in Germany. The Christian Democrats received 32.5% of the vote. Second place went to the social Democrats – they scored 20% of votes, which is the lowest for the party since the Second world war. Third place was taken by the far-right “Alternative for Germany” – the political force gained 13.5% of the votes.