Recipe of the return of the Donbass. That offers Poroshenko’s bill on the reintegration of 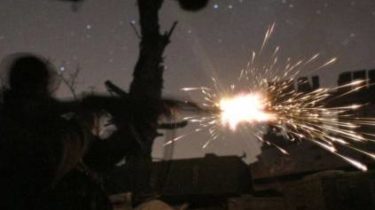 The presidential bill on the reintegration of Donbass submitted to Parliament.

Full document title – bill No. 7163 “Draft Law on peculiarities of state policy on ensuring state sovereignty of Ukraine on the temporarily occupied territories in the Donetsk and Lugansk regions”.

In particular, the document recognised the temporarily occupied territories in the Donetsk and Lugansk regions: land territory and its internal waters within individual regions, cities, towns and villages, where the armed forces of the Russian Federation and the government of Russia has established and exercised by the occupation authority and overall control; internal sea waters and territorial sea of Ukraine, which is adjacent to such land; and the airspace above these territories.

The boundaries of the temporarily occupied territories in the Donetsk and Lugansk regions are defined by the General staff of the armed forces the Ministry of defence.

The bill says that the activities of the Russian military occupation and administration of the Russian Federation is illegal, and any issued in connection with such activity act is void and does not create legal consequences.

The purpose of the document is the liberation of these territories and the restoration there of the constitutional arrange, protection of rights, freedoms and legitimate interests of Ukrainian citizens, victims of the Russian aggression and strengthening independence, statehood and ensuring unity and territorial integrity.

The project establishes the priority of execution of the security provisions in the Minsk agreements.

“In the exercise of state power bodies, their officials, political and diplomatic measures to restore the territorial integrity of Ukraine within internationally recognized borders of Ukraine ensured the priority of the security implementation of the provisions of the Minsk Protocol of 5 September 2014, the Minsk Memorandum of 19 September 2014 “Complex measures” on February 12, 2015, with the aim of creating the necessary conditions for a political settlement in accordance with the norms and principles of international law and the laws of Ukraine”, – the document says.

It is noted that to ensure national security and defence, deterrence and resistance to Russian military aggression in the Donetsk and Lugansk regions are involved in the prescribed manner the forces and means of the APU, other military units (SBU, foreign intelligence Service , State service of special communication and information protection of the national guard, state border service, the state security Department, the State special transport service), Ministry of interior, the national police the like.

Direct management of the forces imposed on the joint operations staff of the armed forces.

In addition, the document prescribes a number of provisions in the event of the imposition of martial law.

Meanwhile in Parliament, Poroshenko submitted the second draft law on the Donbass, which will allow you to enter the UN peacekeeping mission and maintain the international sanctions. The document proposes temporarily, for a period which ends one year from the date of entry into force of the Law of Ukraine “On creation of necessary conditions for peaceful settlement of the situation in certain districts of Donetsk and Lugansk regions”, enter the special order of local government in certain districts of Donetsk and Lugansk regions.

We will remind, Earlier the representative of the Pro-presidential faction in Parliament Ivan Vinnik said that the law on the reintegration of Donbass will not impose martial law, and the regime, the ATO will be replaced for security measures. “Now we are talking about the ATO. It was our hybrid response to hybrid challenges that we imposed on Russia starting a war against Ukraine without a Declaration of war, not recognizing the presence of their own troops… We can move on, and APU on the basis of the Constitution and laws of Ukraine, will provide security measures for the restoration of sovereignty. These measures are not limited to the maneuvers. These measures include, in particular, and the use of force,” said winnick.

While in the Opposition bloc criticized the bill. Yuriy Boyko called it that will separate the Donbass from Ukraine. Also not supported the legislative initiative of the representatives of the Kremlin. In turn, the U.S. Embassy supported the initiative on the extension of the special status of the occupied territories.