Rada in the first reading supported the reintegration of Donbass 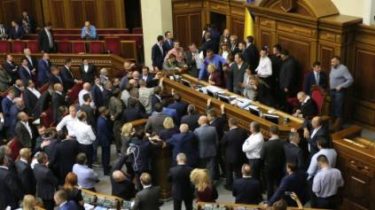 The Verkhovna Rada endorsed the first reading of the bill on the reintegration of Donbass.

For the bill No. 7163 “On peculiarities of state policy on ensuring state sovereignty of Ukraine on the temporarily occupied territories in the Donetsk and Lugansk regions” voted 233 MP.

The document recognized the temporarily occupied territories in the Donetsk and Lugansk regions: land territory and its internal waters within individual regions, cities, towns and villages, where the armed forces of the Russian Federation and the government of Russia has established and exercised by the occupying power and total control; internal sea waters and territorial sea of Ukraine adjacent to the same land territory, air space above these territories.

The boundaries of the temporarily occupied territories in the Donetsk and Lugansk regions are defined to provide the General staff of the armed forces the Ministry of defence.

The bill says that the activities of the Russian military occupation and administration of the Russian Federation is illegal, and any issued in connection with such activity act is void and does not create legal consequences.

The purpose of the document is the liberation of these territories and the renewal of the constitutional order; protection of rights, freedoms and legitimate interests of Ukrainian citizens, victims of the Russian aggression and strengthening independence, statehood and ensuring unity and territorial integrity.

It is noted that to ensure national security and defence, deterrence and resistance to Russian military aggression in the Donetsk and Lugansk regions are involved in the prescribed manner the forces and means of the APU, other military units (SBU, foreign intelligence Service, State service of special communication and information protection of the national guard, state border service, the state security Department, the state special transport service), Ministry of interior, the national police the like.

Direct management of the forces imposed on the joint operations staff of the armed forces.

In addition, the document prescribes a number of provisions in the event of the imposition of martial law.

We will remind, earlier the Committee recommended the deputies to adopt on first reading clarifying bill No. 7163. This clarification concerns the fact that throughout the text of the bill to remove all provisions which referred to the Minsk agreements, replacing them with the resolution of the UN security Council adopted in connection with the Russian armed aggression in the Donbas.

4 Oct presidential bill on the reintegration of Donbass was submitted to Parliament. Later in Parliament, Poroshenko submitted the second draft law on the Donbass, which will allow you to enter the UN peacekeeping mission and maintain the international sanctions. The document proposes temporarily, for a period which ends one year from the date of entry into force of the Law of Ukraine “On creation of necessary conditions for peaceful settlement of the situation in certain districts of Donetsk and Lugansk regions”, enter the special order of local government in certain districts of Donetsk and Lugansk regions.