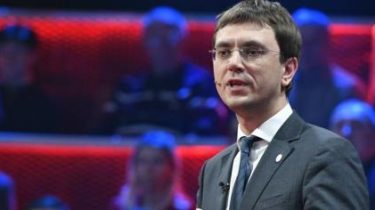 The anti-corruption Bureau suspects the Minister of infrastructure of illicit enrichment through the house in the village of Ivankiv. The mansion worth 7 million hryvnia Vladimir Omelian for 15 thousand hryvnia removes the great-niece of his wife, but the detectives believe that neither the niece nor her family did not have sufficient funds to purchase this property, says the story TSN.19:30.

The Minister alleged that housing rents since the summer, but detectives say that he lived there in 2016, but failed to mention the house in the Declaration. In the same way as a BMW X5, which is used, although the car supposedly belongs to the brother of the Minister.

Videointerphone Bureau suspects the Minister of infrastructure of illicit enrichment

The Minister on the investigation learned from the media and claims that his family is rich and could afford to buy such housing. “This is what I have heard today from the media. For me it also was a surprise. I hope that in the near future be able to go to NABOO and give all the explanations that interest them. We do not hide anything, furthermore, the house has at all quadcopters and public space, how transparent we have to be? I will napannee, to invite you to the shower and bathroom,” said Omeljan.

“No violations were”. The Omelyan responded to the NEB investigation on illicit enrichment

In the NEB announced that on October 10 the Solomensky court for their appeal were allowed to tap telephones Volodymyr Omelyan. “Detectives of the National anti-corruption Bureau of Ukraine carry out the prejudicial investigation in criminal proceedings on the fact of possible illicit enrichment and the possible Declaration of false data by one of the members of the Cabinet of Ministers of Ukraine. This production launched in may of this year. During the investigation of the suspicion was never released,” the report to law enforcement authorities.