The Russian businessman admitted that he is an investor “trade Commodity”, suspected of money laundering, Ministry of defence 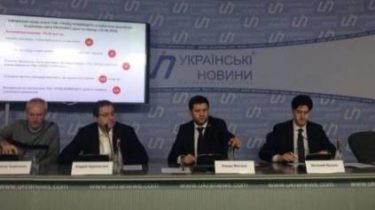 Russian businessman Andrei Adamovsky, which is an investor of “trade Commodity”, suspected of involvement in the theft of public funds in the procurement of fuel by the Ministry of defense, assured that all actions of management of the company was legitimate.

“I’m sure it’s just defamation of the company, when used by law enforcement agencies,” said Adamovsky at a press conference on Monday, October 16.

He also said that is investor,”a trade Commodity“and not a shareholder of the company. “I want to say that neither I nor Mr. Vladimir Trofimenko are not shareholders “trade Commodity”. We are just its investors, but Finance different projects,” said Adamovsky.

In addition, Adamovsky said that the company has no relationship with the people’s Deputy Alexander Granovsky, who in this respect had previously accused his colleague Sergey Leshchenko. “I’m reading in the media about the relationship of Granovsky with “trade Commodity”. It’s just a trash of some sort. I categorically deny any connection Granovsky with “trade Commodity”, he said.

As you know, October 11, detectives NABU and SAP detained the Deputy Minister of defense Igor Pavlovsky and Director of the Department of public procurement and delivery of material resources of the Ministry of defense Vladimir Gulevich for embezzlement of over 149 million UAH of the state budget during the fuel procurement for the defense Ministry, according to the article part 5 of article 191 of the criminal code. To them threatens from 8 till 12 years of imprisonment.

12 Oct NABOO reported about suspicion to two defense Ministry officials of embezzlement of public funds in the purchase of fuel.

The company “trade Commodity” appears in the criminal scheme for the purchase of fuel: NABOO and COAG suspect official owner and Director of the company Vadim Maiko and informal leader, Vladimir Garkavy.

Founder “trade, Commodity” lived in an apartment with tattered Windows and went on the bus

According to media reports, suspected of involvement in the theft of officials, OOO “Treyd Commodity” (monay) disappeared.

The former Deputy Prosecutor General Vitaliy KASKO resigned member of the Board of “Transparency International Ukraine” and plans to “participate in the defense of clients, including suspects of corruption-related crimes”, in particular, the company “trade Commodity”.

Later, the partners Kaskiv explained that he took the case “trade Commodity” because it found no violations of law in the relations of the company.