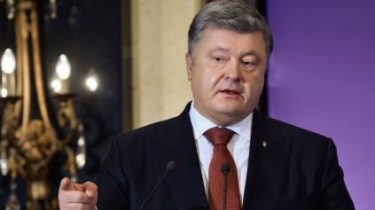 President of Ukraine Petro Poroshenko said that the Verkhovna Rada will eliminate parliamentary immunity in Ukraine.

“As promised, the inviolability of Ukraine will be liquidated. Last year unlimited immunity we have deprived judges. Tribute should be paid to MPs today, they made an important political step towards the abolition of their own privileges”, – he stressed.

According to Poroshenko, during the next session of “Parliament will never lose courage and give three votes for the final and irrevocable solution to this problem”.

“I really hope that those who most actively promoted on the topic of integrity in these days, will not change their position when they see that this is not PR, but a new reality”, – concluded the head of state.

As promised, the inviolability of Ukraine will be liquidated. Last year unlimited immunity we have deprived judges. CL…

Published by Petro Poroshenko on October 19, 2017

We will remind, earlier Poroshenko has submitted to Verkhovna Rada a bill on amendments to article 80 of the Constitution of Ukraine, which provides an exception to provisions under which people’s deputies of Ukraine are guaranteed parliamentary immunity. It is also proposed to eliminate the provision according to which the deputies can not be without the consent of Parliament was brought to criminal responsibility, detained or arrested. The bill provides that it shall enter into force on 1 January 2020.

Glad the majority supported the decision to include in the agenda and to direct the conclusion of the constitutional Court of Ukraine the draft Law on amendments to article 80 of the Constitution of Ukraine (re immunity of people’s deputies of Ukraine).