In Kiev, the activists smashed the courtroom after the police used against them gas 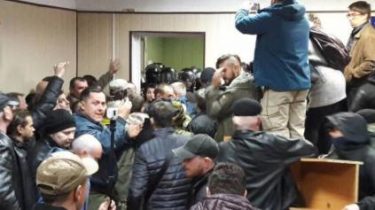 In the Svyatoshinsky court of Kiev in the night of the 24th of October between police and supporters of the leader of the “Volunteer movement of the OUN” Nikolay Kohanivsky clashed.

Monday, October 23, the court shall elect a measure of restraint for Kohanivsky, who is suspected of shooting from a pneumatic pistol during the fight with the ex-commander of one of platoons of the “Right sector” Ruslan Camalou.

The court could not elect a measure of restraint Kochanowski and moved the meeting on the morning of October 24. After making this decision, the activists blocked the courtroom, not to allow law enforcement officers to take the leader of the OUN in the detention center.

We will remind, on 21 October, about five o’clock in the evening near the metro station “Akademgorodok” in Kiev did the shooting. The weapon was in the hands of the head of the volunteer movement, the OUN Nikolay Kohanivsky.

At 16:50 in a call center received information that near the metro station “Akademgorodok” there is a fight and shots fired. On the scene immediately sent to the police. There was Nikolay Kohanivsky with his wife. He had verbal conflict with the unknown, during which the head of the volunteer movement, the OUN (probably from the device for shooting of rubber bullets) fired several shots at the stranger. As a result, the victim (face mounted) – tangential wounds in the back and leg (assistance was provided on site).