Male love: the vets figured out why in the oldest turtle in the world no offspring 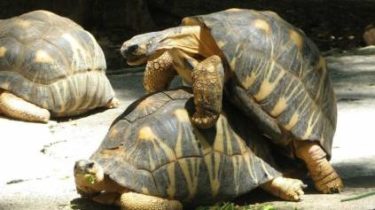 The vets figured out why the world’s oldest tortoise Jonathan 1991 no offspring. It turned out that for 26 years he mated with the female Frederick, and the male with Frederick.

On it informs Daily Mail.

Veterinarians explained that the 186-year-old Jonathan, who has lost his sight and smell could not distinguish the female from the male. Why it has not turned out the zoo workers, is unknown.

In Thailand from a blood infection and died a turtle, which got almost a thousand coins

This 186-year-old giant tortoise is probably gay since his true love is a male tortoise.

Jonathan lives on St Helena, which is part of the British overseas territories, in 1882.

We will remind, in the rivers of Bolivia has produced more than a hundred thousand young turtles. It is noted that summer the turtles have almost disappeared from local waters, because their meat and eggs are very nutritious and popular among hunters. In turn, the smaller turtles became, the more they suffered the ecosystem.

Reptiles eat the pests that pollute the river. If these kids don’t get shot by poachers, they will grow to meter size and will be able to live to a hundred years.