Kohanivsky released from the “cage”, but the trial is in progress 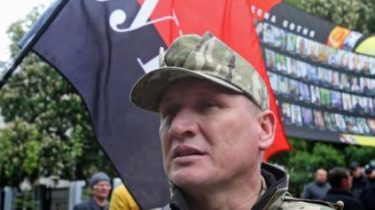 In the Svyatoshinsky district court yesterday trying to choose a measure of restraint for the leader of the “volunteer movement of the OUN” Nikolay Kohanivsky. 3 days ago there was a conflict between Kohanivsky and a volunteer from the “Right sector” Ruslan Camalou. The quarrel ended in the shooting. The night before Kohanivsky had to choose a measure of restraint, but not meant to be. Assaults, barricades, tear gas and three dozen detainees – says the story TSN.19:30.

The judge declared a recess until the next morning. And Kohanivsky sent back to the detention center.

When the detainee tried to withdraw, a scuffle ensued. And his henchmen decide to barricade themselves and remain with him until morning. But the barricade could not stand and supporters Kohanivsky Wagenseil and dragged to the paddy wagons.

After a few minutes it became clear that among the detained lawyer Kohanivsky, his return to the courtroom

The lawyer said that among the detainees were journalists. Later in the hall brought Nikolay Kohanivsky with a broken forehead.

But MPs and lawyers to begin proceedings do not give. Deputies angered cage in the courtroom. The lawyers demanded of doctors.

Medics ambulance glued to the forehead, deputies block the cage. The hearing was postponed till three o’clock, because Kohanivsky was taken to the hospital emergency room.

A measure of restraint for Kohanivsky, the court should choose to 17:30. At this time, the deadline of content Kohanivsky custody.

A number of MPs said that they are ready to bail of the leader of the volunteer movement “OUN” Nikolay Kohanivsky.

Later Kohanivsky released from the “cage” in the courtroom and took off the handcuffs, since expired 72 hours after his detention, but the court session continues.