Mosiychuk boasted improvement in the photo Paruby at the hospital 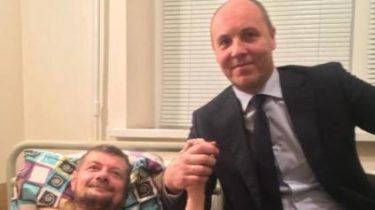 The MP from the Radical party Igor Mosiychuk, who was injured in the explosion in Kiev, already goes on the amendment.

“Alive. The condition improves, but the body has not yet removed all the shrapnel elements, and, of course, sometimes the pain become unbearable,” – said the MP.

According to Mosiychuk, now life and the struggle for it continues.

He also noted that on 26 October, he was visited in hospital by the leader of the Radical party Oleg Lyashko, fellow radical Andriy Antonyschak and speaker of the Verkhovna Rada Andrew Parubiy.

“All Express words of encouragement, help me, others wounded and the families of the victims of the terrorist act committed with the purpose of my assassination,” added the MP.

We will remind, the day before, on 25 October, in the evening near the Studio of the TV channel “Espreso” on Mickiewicza street in Kiev exploded a car parked next to the motorcycle. The explosion injured five people, among them – the people’s Deputy Igor Mosiychuk and political analyst Vitaly Bala. Later the guard Mosiychuk died on the way to the hospital. The explosion qualified as act of terrorism, the investigation conducted by the security Service of Ukraine.

Later it became known that the attack against Mosiychuk killed a bystander. The man 1981 year of birth has died in hospital.